Capacity: What you need to know now

Jul 10
Comments Off on Capacity: What you need to know now
Posted in Energy demystified, Pricing, Transparency

Over the last 18 months, the dynamics of Northeast power and gas markets have changed in a few significant ways. First, as we’ve discussed before, prior to 2014 the Northeast was generally a Summer peaking region in terms of both demand and cost. (In other words, peak demand occurred in the Summer as did peak prices.) Now, since the Winter of 2014, costs have peaked in the Winter while demand continues to be highest in the Summer. We’ve discussed the dynamics of these shifts in prior posts, here in a post titled “Winter is the New Summer”, as well here in a post on Demand Response and in our Q1 Markets Report . What we haven’t touched on lately is what has transpired in capacity markets during the last 18 months.

Over the last 12 months there have been some changes to capacity markets thanks primarily to lower demand due, in part, to cooler summer weather.

Here’s a definition of capacity as we describe it on our Resources page:

Since electric energy cannot be easily stored, the Independent System Operator (ISO) administers a market for installed generation capacity to insure that, over the long run, adequate generation resources are available to supply load. Each electric account is assigned a capacity obligation and each retail electricity supplier must purchase installed capacity to meet that obligation. The market price is set by annual and/or monthly auction processes that differ among the ISOs. This cost will be the second largest component of your electricity cost. (There is no installed capacity obligation or cost in ERCOT.) 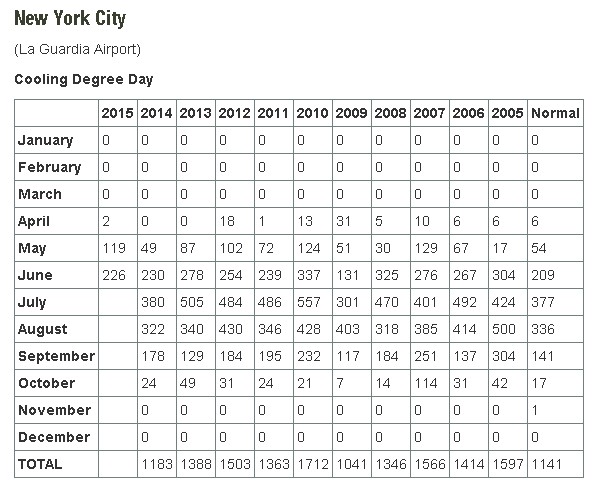 Thanks to the cooler than expected Summer Months, the system peak hour occurred in early September, instead of July/August. Remember, the state-wide system peak hour determines the timing for calculation of a building’s capacity tag.

The fact that the system peaked in September can have a significant impact on certain customers who are not typically in full operation during July/August, but are reaching peak usage during September. Schools and Universities, for example, may find that their operation slows down during the Summer months. That means those clients have enjoyed a  relatively low capacity tag. This year, the annual peak hour happened on Sept 2, when Schools and Universities were in session.

Why does this matter? The capacity tag, that is defined in July/August or even September of 2014 will be part of a customer’s costs starting in May of the following year (in this example May 1, 2015). Some clients who typically enjoyed low capacity tags in prior years have seen big increases beginning in May of this year– Schools for example. We’ve seen some clients whose capacity tag is almost 2 1/2 times higher than their historical tag. The price impact can be significant: 2-3 mils/kWh depending on the client (about 2.5 to 3%). Customers will have to deal with that additional cost, no matter what happens this Summer, through their next contract term. That’s the bad news. The good news is that energy markets are so low right now that this savings might more than offset that additional budget cost.

Bottom line for businesses: Capacity is the gift that keeps on giving. If you are expecting a significant drop in prices thanks to the decline in energy markets, and you don’t see it, capacity may be the reason.
Sign up for The MWh newsletter